I'm always thinking about new ways to display my hand engraved artwork to keep my stand looking fresh and interesting when I'm exhibiting at art fairs and other events such as the LovelocalExpo each year. 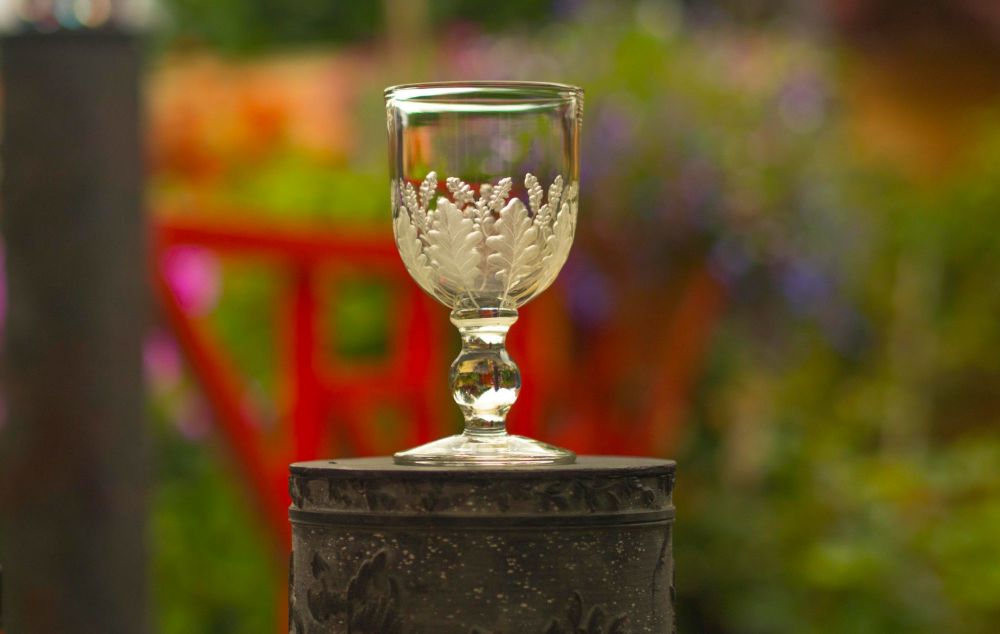 While out shopping with my wife I'll often drag her through shops such as Selfridges to look at the jewellery, handbags, or perfume departments just to see what's new in the way of shop displays. Around the time that they start to bring in the new stock for Christmas is the time that they'll usually come up with the latest ways to show off their wares so it's at that time when I find it's good to get some inspiration.

On this occasion my inspiration came from a visit to a local garden centre. We only called in to get some bedding plants for the garden but that all changed once I'd had time to think about something I had seen there. As I sat there sipping my latte while relaxing in the garden centre cafe ideas started to come to me.

As we were walking around the garden centre earlier on we came across various displays of these tall objects that they were calling 'Totem Poles'. They were selling them as garden ornaments that you could install on your patio or flower bed to add a bit of interest, either placed singularly or in groups of three or more. They were all the same height at about 1.84 metres and each one had a pattern on it. 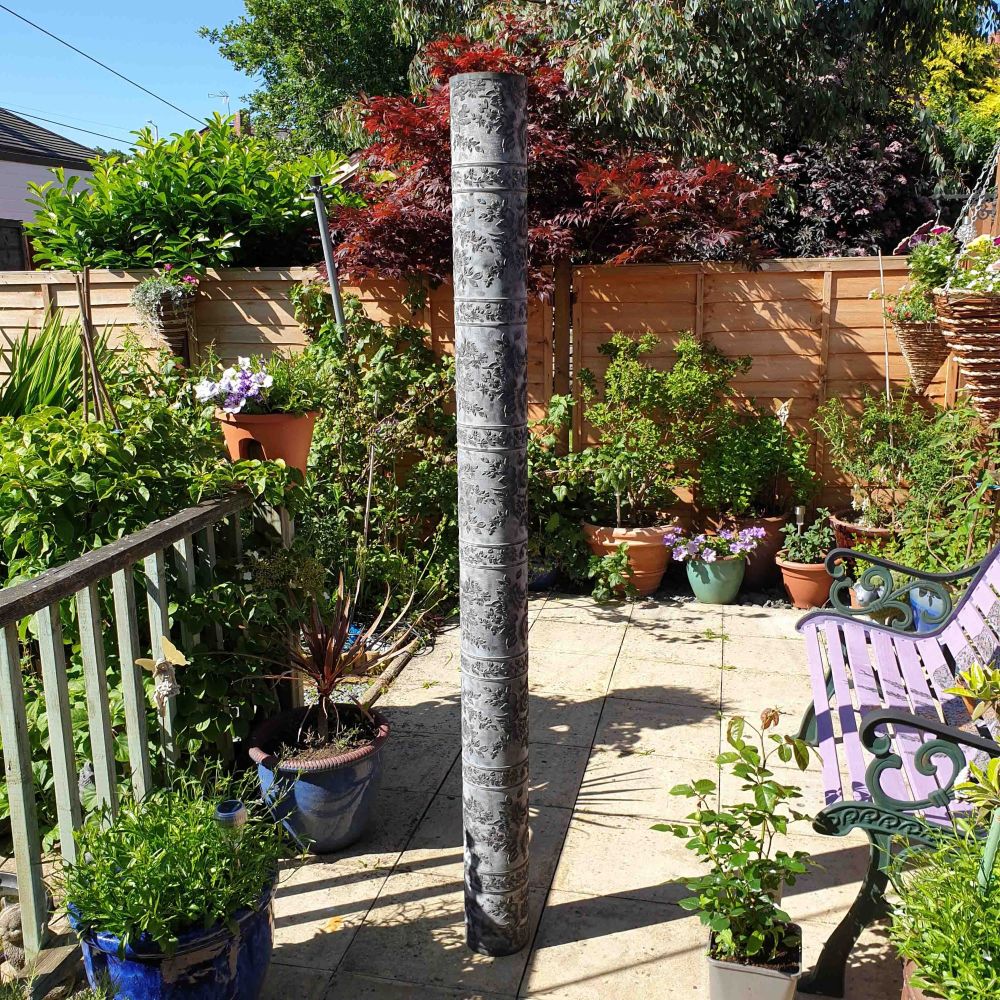 One thing that struck me was that each and every one of them was totally different from the rest making them all very unique objects. On closer inspection I realised that these 'Totem Poles' were actually 'Wallpaper Print Rollers' used to print the various coloured designs onto wallpaper. There could be more than one of these print rollers for each complete wallpaper design as they would need one for each individual colour and section of the pattern.

Some of them had beautiful flower designs, some had hearts or other shapes on them and others had really detailed textures or repetitive geometric shapes and patterns. Each one had a little bit of colour left on it here and there to remind us of its past life as print roller with some of them having more colour on them than others. 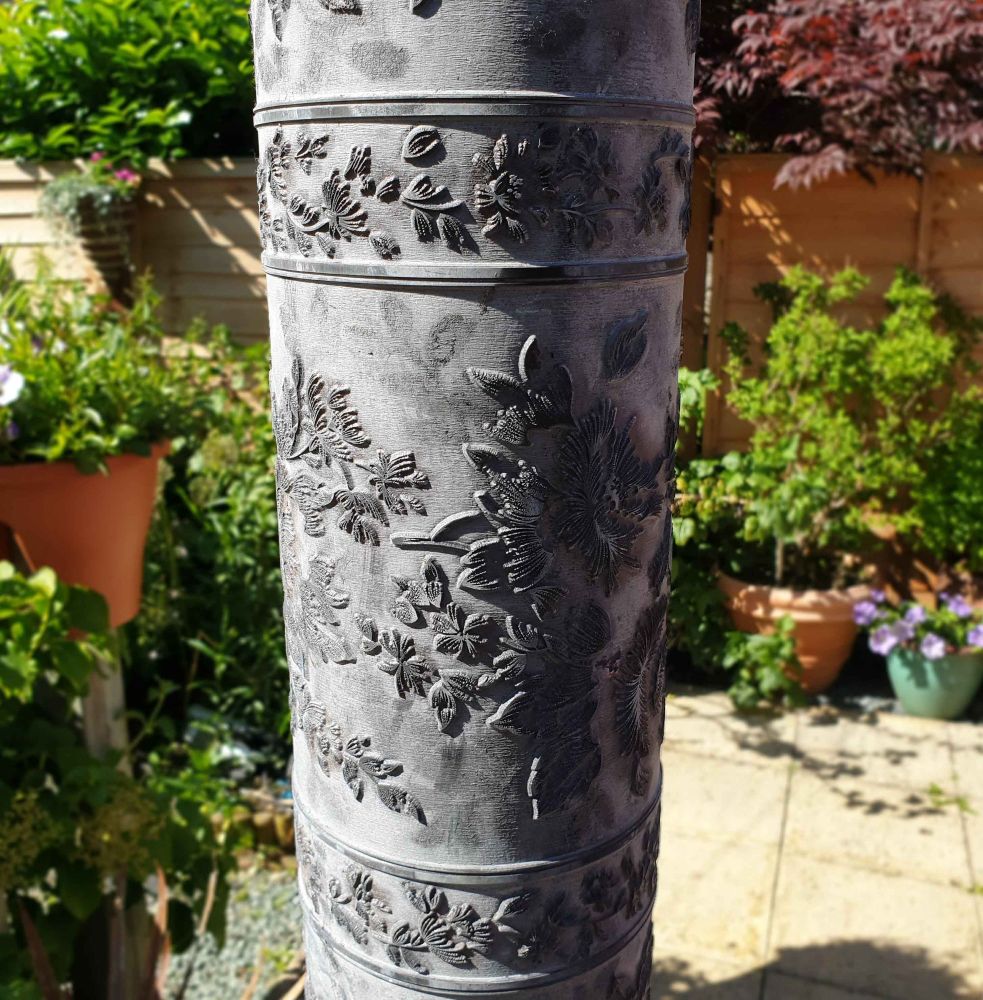 I particulary like the ones with a grey look to them making them look like they are made of cast metal. The patterns on them are raised up and are made of rubber. The patterned parts of the rollers are the cleanest as they would have been wiped clean of excess paint each time the roller was used and this makes the pattern stand out in black over a background of various colours which have collected in the harder to clean areas of the rollers surface. Some rollers were quite boring to look at but my eyes were drawn to the really detailed  ones which I thought made them look almost like they had been carved by Japanese or Chinese craftsmen.

Initially I was interested in them because of their beauty but it wasn't enough to actually purchase one, least of all for the garden but while sipping my latte in the cafe my mind started to wander and it quickly came to me that I could probably cut them up into varying lengths to make into lovely looking plinths for my engravings to stand on at art shows. 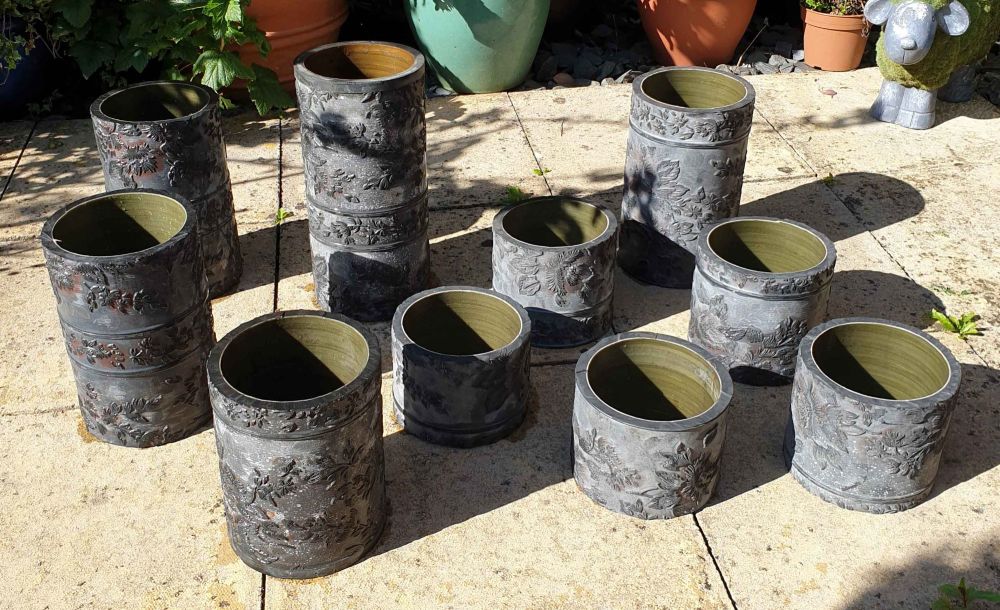 I chose a plinth to take home with me and put it in the car along with the bedding plants which we had purchased and once I arrived home I got the chop saw out and began to cut the walpaper print roller into different sized pieces of varying height. 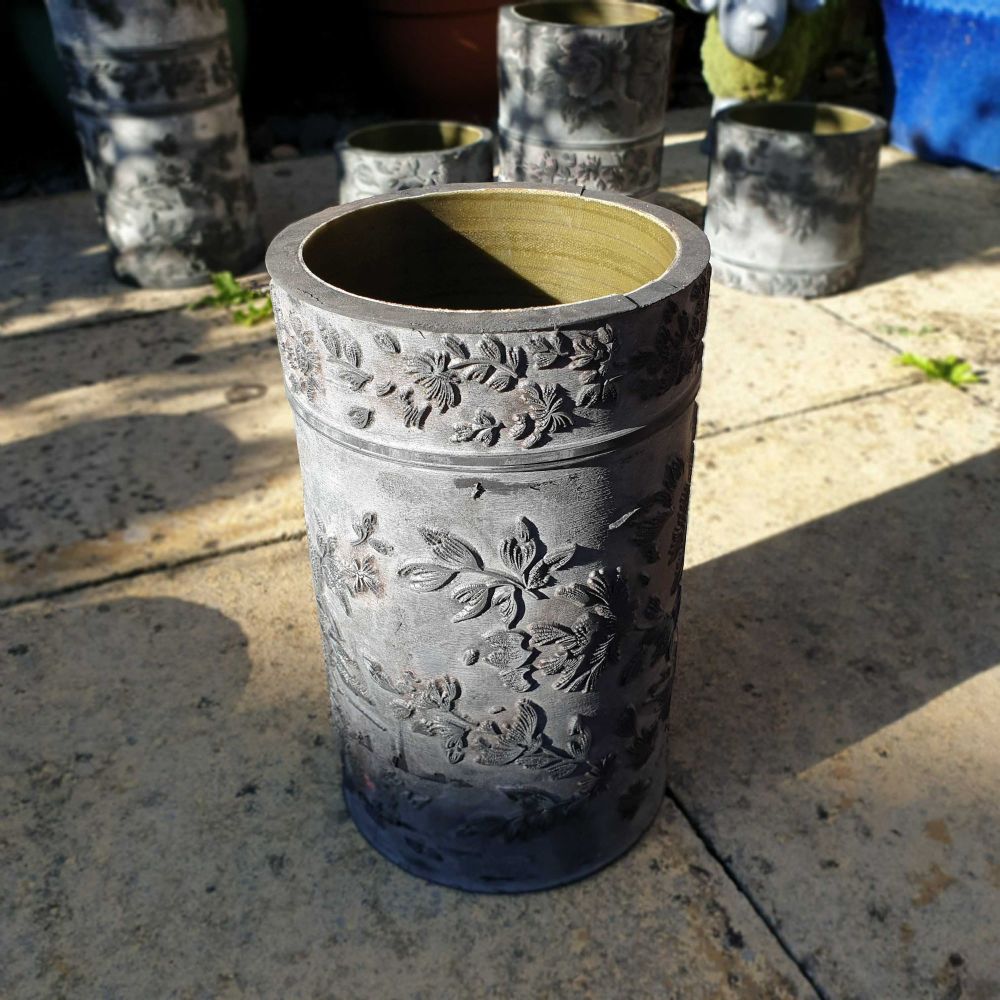 I found some unused 3mm ply wood that I had hanging around in the shed and cut some circular pieces of wood with my Jigsaw to glue onto the top of each plinth with 'Hard as Nails' glue. 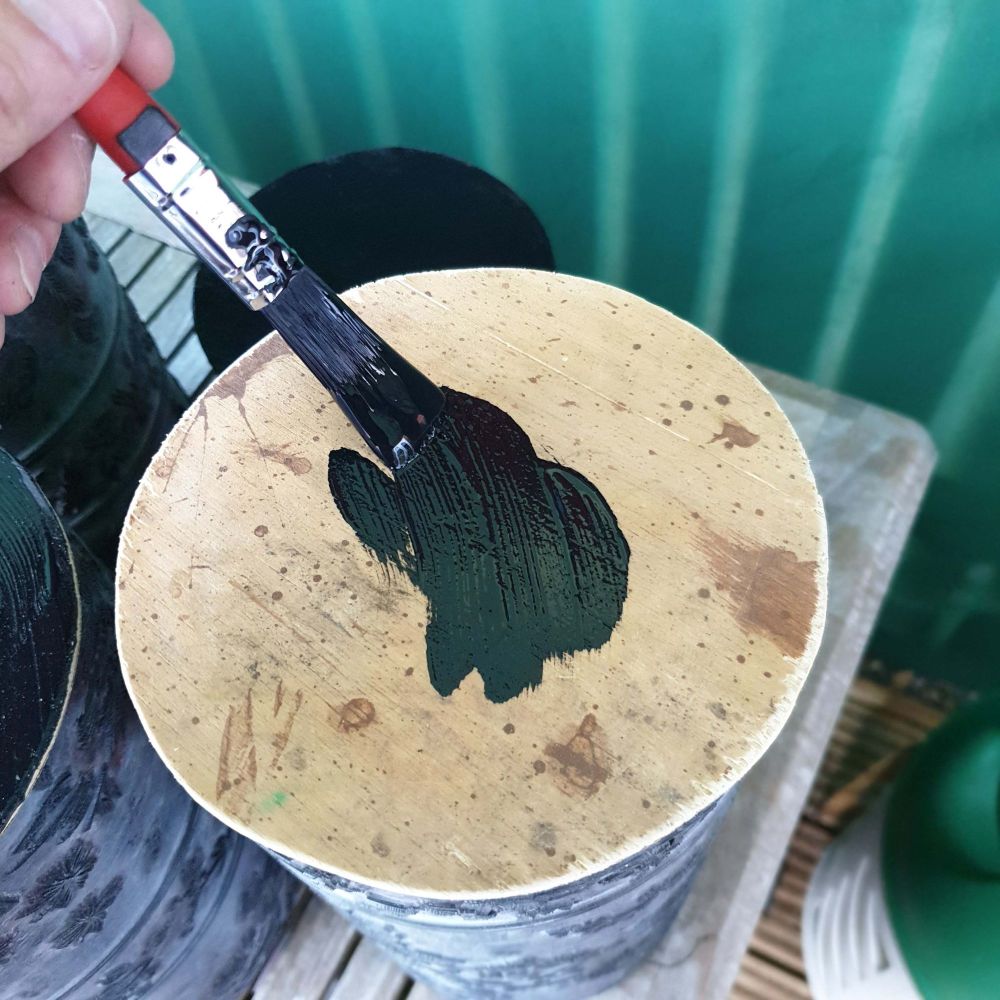 I left the glue to dry for 24 hours before sanding them and painting them with blackboard paint. 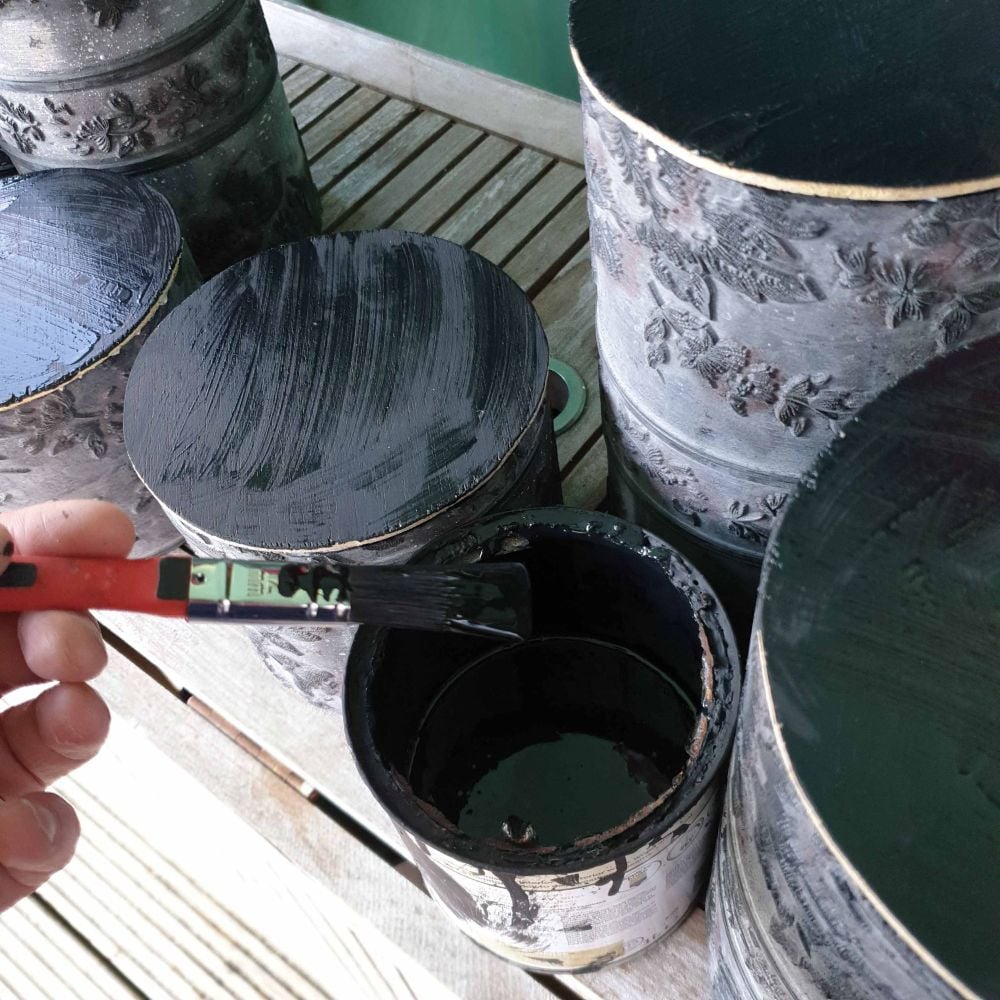 The weather was great for painting that day as it was warm with a gentle breeze and I had a large gazebo set up to work under so the paint dried pretty quickly.

After the first coat of paint had dried I lightly sanded them again before applying another coat of blackboard paint. 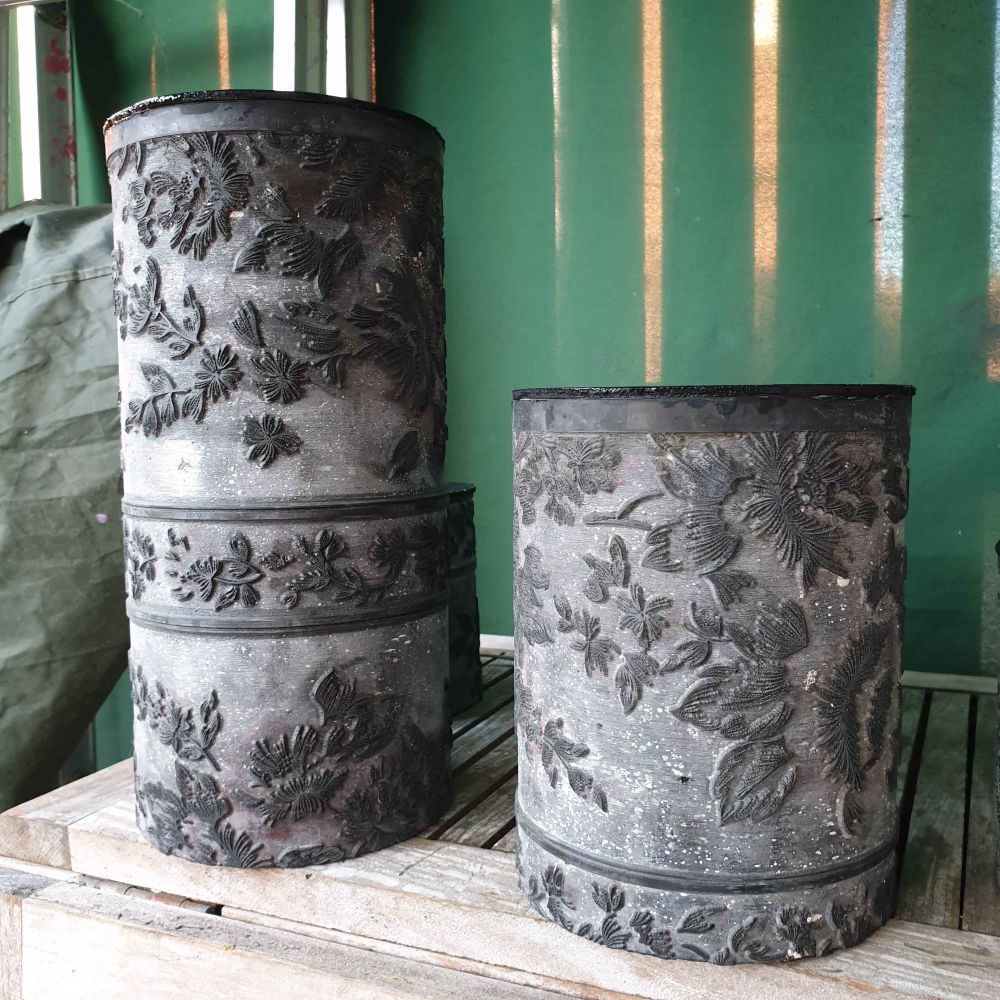 I had an ornamental fence panel in the garden with a small water feature next to it which I had made and put there a few years ago but it was now looking a little bit shabby. Some of the wood was becoming rotten and it really needed replacing. I got to thinking about how I might be able to use these 'Totem Poles' to brighten it up and make the feature a bit more interesting. 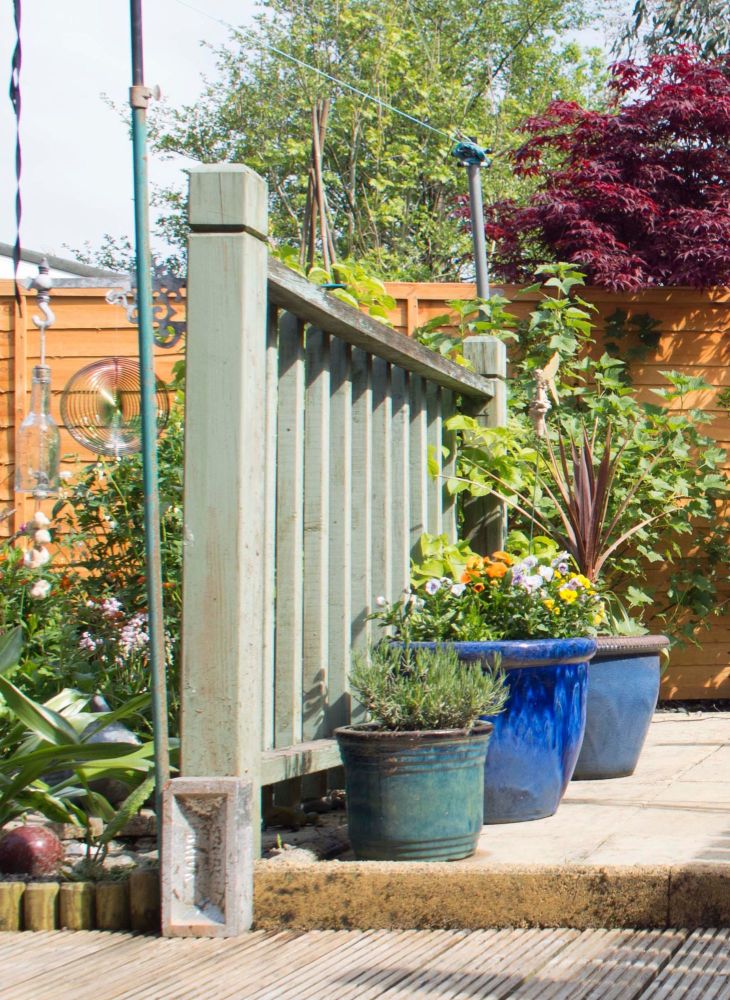 Off I went back to the garden centre for two more 'Totem Poles' to cut up and use for either side of the ornamental fence panel.

I wanted to create a Japanese style look to it so I took the old panel apart putting the good wood to one side. I then cut the pieces up and screwed them together to create a new and more interesting Japanese inspired design. 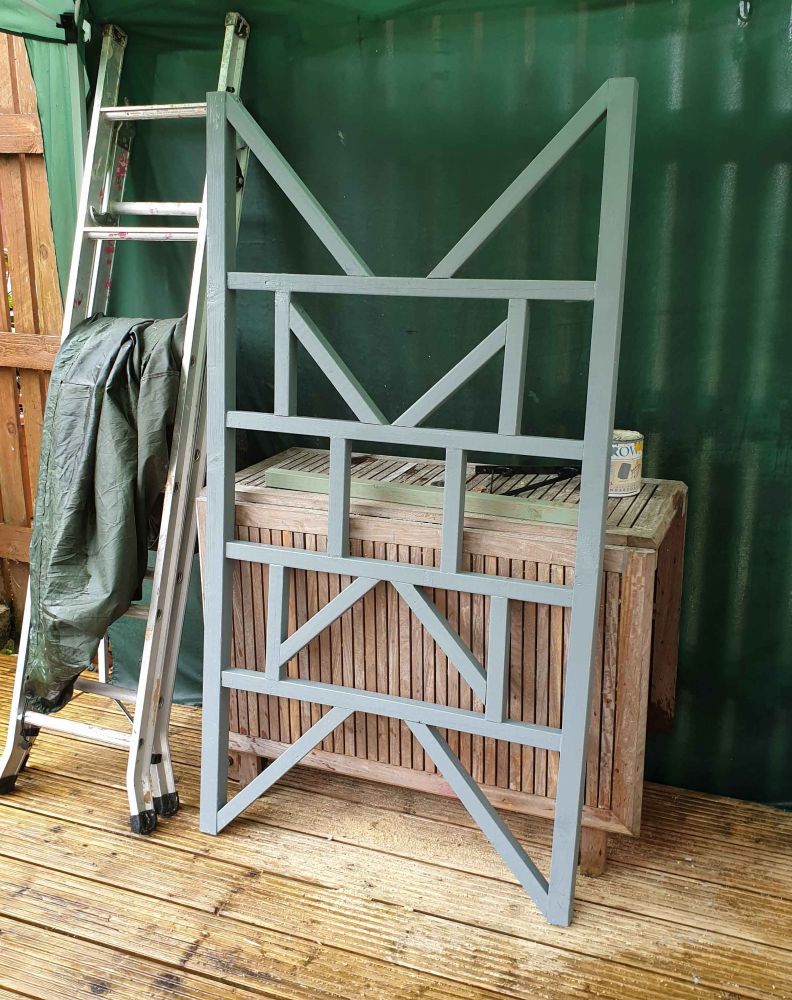 I already had fence posts in place which were also in good condition and I intended to place the 'Totem Poles' over the top of them. Once they were in place I measured the gap between them and made the new ornamental fence panel to fit that leaving a little space on either side for fence panel brackets to be screwed on which would eventually hold it in place.

The new ornamental panel needed to be painted red so that it would give that beautiful Japanese look to the garden. 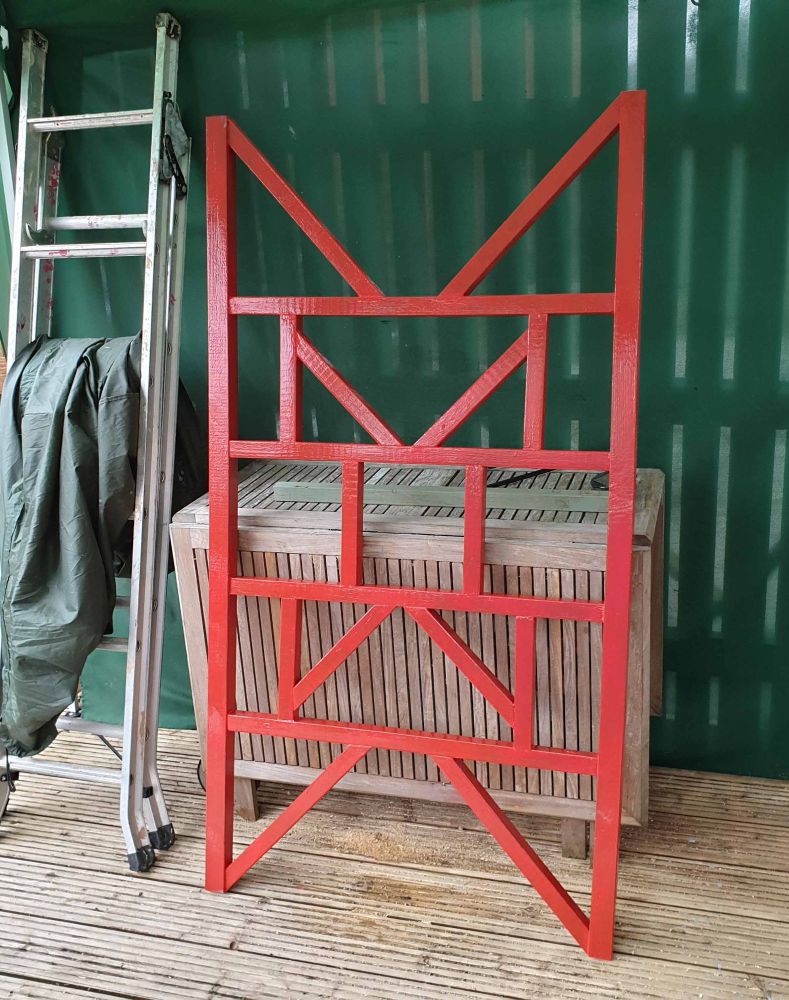 The next job was to fit the fence panel into position. 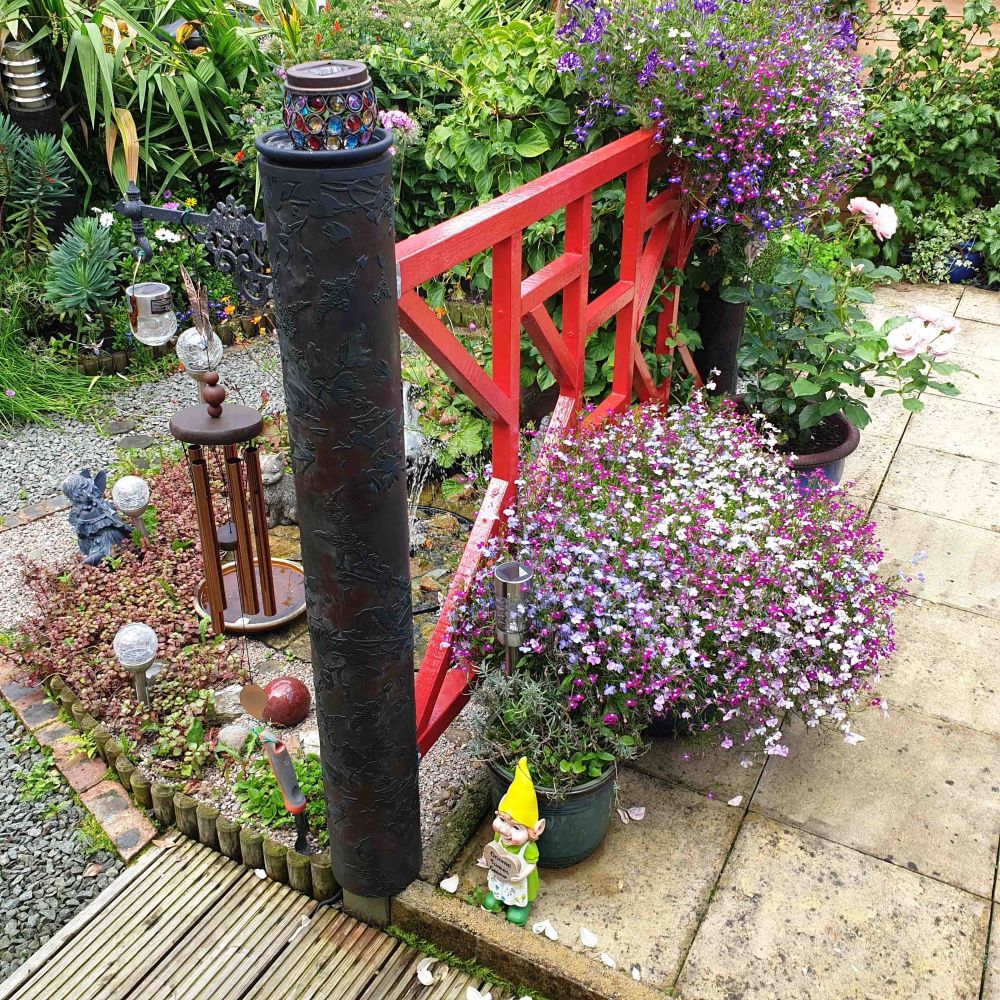 I placed 7 inch teracotta pot trays which I had painted black into the openings at the top of each of the wallpaper paint rollers so that rain wouldn't get in and rot the wooden posts inside. I then placed some lovely garden lights given to me by my sister on top of each of the trays to light up the garden in the evenings. 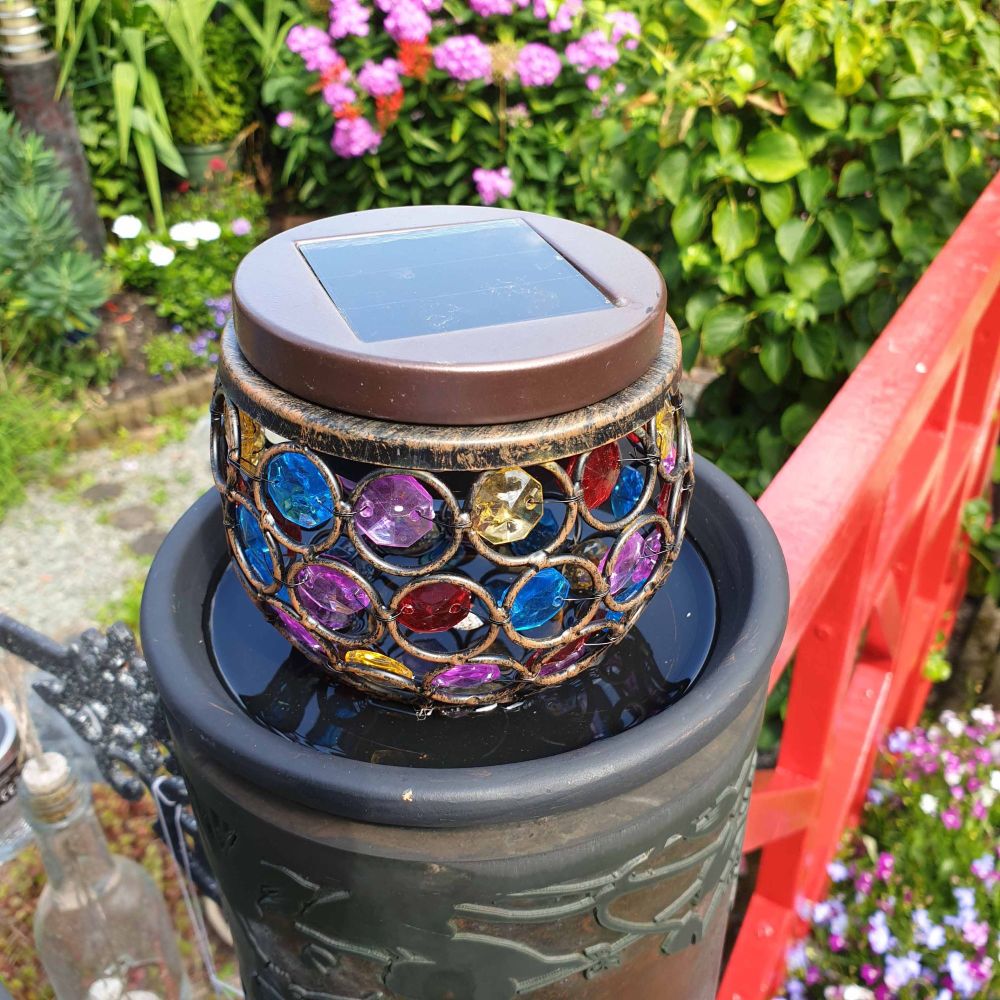 I hope this inspires you to create something similar for yourselves.

PLEASE SHARE to your friends if you like what I've done and add your comments and questions below!